a Dieselgate employee and a manager 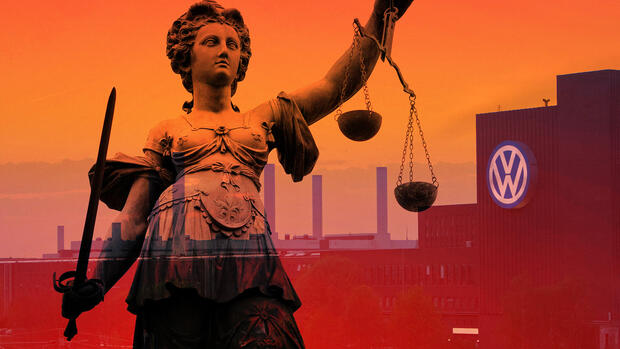 Volkswagen has a two-class system in handling the Dieselgate scandal. The carmaker just fired a software engineer and is threatening to sue her for damages. At the same time, her boss is still being paid even though he has been furloughed, and is protected from being prosecuted.

The story of Silke Frenz and her boss, Hajo Baums — both names have been altered — shows how the German carmaker has turned notions of justice inside out, treatign a senior manager differently to a regular staffer.

Or perhaps justice has little to do with it. Baums is still receiving the equivalent of his monthly salary — €14,600 ($16,524) — along with an annual bonus and full benefits. VW is paying for his legal counsel, a lawyer from the same firm that is handling the company’s defense. If Baums were to be called to testify in legal proceedings, VW would cover his costs. “The conflict of interest is obvious,” commented an attorney working for another manager involved the diesel scandal.

Baums’ lawyer, Philipp Gehrmann, said there were no issues with the simultaneous mandates from VW and Baums. The law firm complies with all legal requirements, he said.

Frenz, meanwhile, who earned a doctorate in engineering to pursue her passion for cars and rose through the ranks in a 22-year career at VW, was summarily fired last summer. She gets no compensation, no benefits, no bonus, and remains unemployed with little prospect of ever finding another job in her specialty. Worst of all, VW has said it may seek damages for the harm caused by diesel scandal, which now mount to a colossal €28 billion. Frenz could never pay a fraction of that sum but a lawsuit could ruin her life.

Frenz was aware of the software that was designed to fool regulators and deceive 11 million clients into thinking that emissions from the company’s diesel engines were far lower and less harmful than they were in reality. Baums headed the department, which developed software for diesel engines. His team installed the defeat device which manipulated emissions in a testing environment to appear much lower than in actual road performance.

It was the discovery of this discrepancy by US environmental authorities in 2015 that led to Dieselgate and the revelation that VW had knowingly perpetrated the fraud for a decade in its determination to sell “clean diesel” cars. In the meantime, evidence has mounted that knowledge of the subterfuge was widespread in the company. Former chief executive Martin Winterkorn may have been informed, although he says he only learned of the fraud in September 2015.

Prosecutors are conducting investigations of more than 80 suspects, including Winterkorn, but so far as is known, VW has fired only six people. When Winterkorn came under suspicion, the VW supervisory board issued a statement testifying to his good character. There has been no discussion of clawbacks for the compensation he received over the years.

Baums presented the details of how the fraudulent software worked at an internal meeting on November 15, 2006. VW was not able to build a diesel engine that met US environmental standards, but proceeded with its marketing campaign for clean diesel anyway, relying on the defeat device to ensure cars passed inspections.

When VW responded to California authorities’ suspicions in 2015 by sending a manager, it thought it could simply buy time by pleading ignorance. But the manager instead revealed the mass deployment of the defeat device. Baums at that point wrote to a colleague, “Oh shit, totally blew it.”

With the prospect of numerous criminal and civil proceedings, VW could no longer keep Baums where he was. He was furloughed in September 2015, but by December had concluded a favorable agreement with his former employer. It is essentially a free pass with no expiration date. The agreement, signed by then-CEO Matthias Müller, pledges not to seek any legal recourse against Baums.

VW did not respond to questions about why they have been so harsh in their treatment of Frenz, while coddling the man who directed her activities. Frenz considers herself a sacrificial pawn as VW attempts to limit the damage to the company’s reputation and to top management.

Frenz’s lawyer, Till Hoffmann-Remy, said there is no denying she was aware of the dubious function of the software and accepts responsibility for her involvement. “We will prove in the trial that the relevant decisions were made at a different level,” he said.

Maybe, someday. Just a few days ago, VW got a continuance for Frenz’s labor court hearing, pleading that the responsible company counsel was overwhelmed with work. Buying time again.