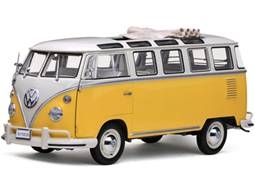 Another great Sun Star Diecast in amazing 1/12th scale. This one, no. 5077, is a large size 1/12th scale model of the great 1962 Volkswagen Samba Bus Finished in authentic Yellow with white trim.

Finished in Yellow with White Top and Accents

This is one great and larger than life 1/12th scale model by Sunstar. Look for this one at a Scale Model retailer near you. Detailed as only Sun Star can.

Information on the Sunstar No. 5077 1962 Volkswagen Samba Bus is brought to you by Volkswagen Diecast Cars.