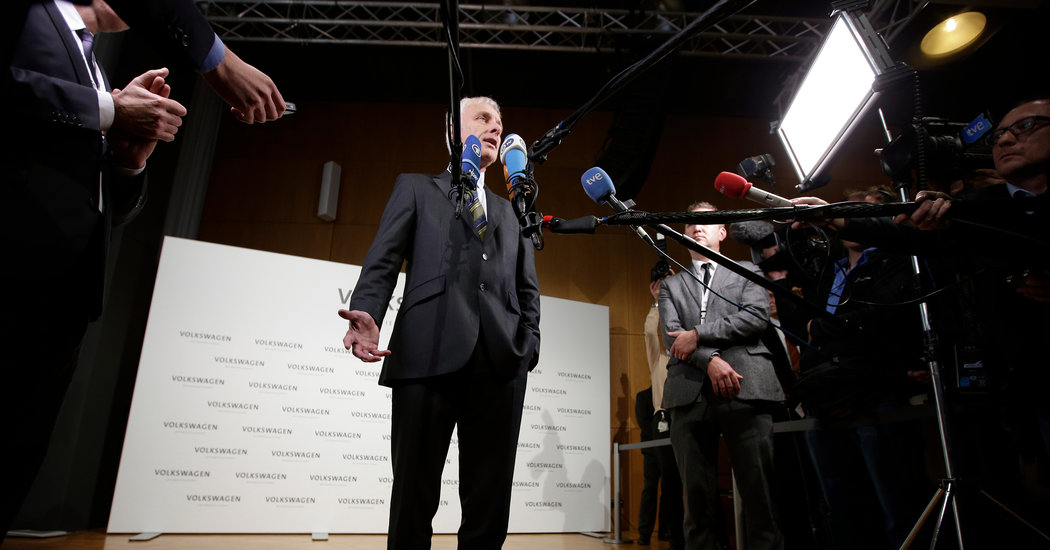 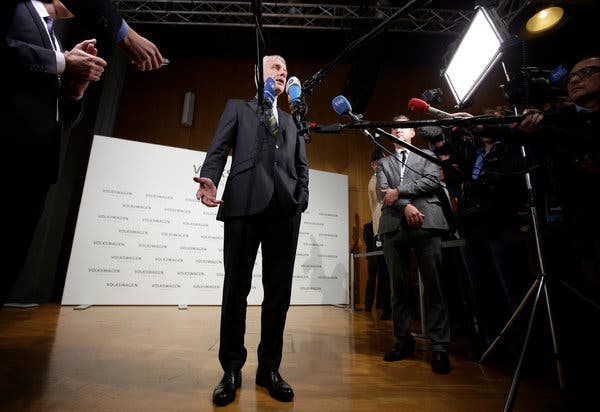 Matthias Müller, the new chief executive of Volkswagen, talked to the media in Wolfsburg, Germany, in December.CreditCreditMichael Sohn/Associated Press

LONDON — Someday, Volkswagen’s emissions cheating scandal will be studied in crisis communications textbooks. And not in a good way.

“There was something like a tsunami,” Hans-Gerd Bode, Volkswagen’s communications chief since September, said in an interview. “Thousands of calls and emails coming in at the same time.”

“A crisis like this, the company was not prepared for,” he said. With the company continuing to negotiate with foreign governments, “We don’t know the right way out.”

In the months since it admitted it designed its diesel cars to cheat on tailpipe-emissions tests, the company has struggled with its messaging. A low point came last month when Matthias Müller, the new chief executive, visited the United States and told NPR, “We didn’t lie,” when VW clearly did. The outcry forced Mr. Müller to call NPR back and revise his statement.

The reaction to the scandal has been swift. A recent Harris Poll of Americans’ attitudes toward the 100 most visible companies ranked Volkswagen dead last.

It has been a humbling fall for a company known for generations for its deft ability to create a friendly image, from its revolutionary 1960s marketing campaign for the original Beetle to VW’s 2011 Super Bowl commercial featuring a boy dressed as Darth Vader, using the Force to turn on a Passat. More recently, Volkswagen has preached its environmental virtues — emphasizing its diesels — as a selling point.

The scale of Volkswagen’s crisis makes it a particularly unusual case. Even some of the largest corporate crises in the past were focused in a single market, whether it was BP’s Gulf of Mexico oil spill or Google’s battle with European regulators over data privacy.

But Volkswagen, which includes the Audi, Porsche and Lamborghini brands, faces a crisis that traverses the globe, complicating the response across borders and cultures. For instance, the company has argued that German privacy laws prevent it from fully cooperating with American investigators. On the other side of the world, prosecutors in South Korea are threatening to bring criminal charges against executives there.

At the same time, Volkswagen is an insular company based in a country that prefers to tightly manage and script press interactions.

It is Mr. Bode’s job to clean up the mess. Before the scandal, he was top spokesman for VW’s Porsche division, hosting media events featuring vintage sports cars and the glamorous tennis star Maria Sharapova. Now he’s leading the damage control in a globe-spanning public relations crisis.

VW should have known it was headed for a disaster. For more than a year, the company told American regulators that its diesels simply had a technical problem that was causing tailpipe emissions to soar on the road. Then last September, Volkswagen admitted it had created software to detect and thwart laboratory tests for pollutants that pose health hazards.

Its chief executive, Martin Winterkorn, chalked it up to “the mistakes of a few people.” Few believed that was true, however, considering that the scandal involves 11 million vehicles and engines developed over several years.

When he resigned a few days later, Mr. Winterkorn said, “I am not aware of any wrongdoing on my part.” Recently, internal documents suggested he may have been aware of the issue as far back as May 2014.

Since then, the company’s approach has often faltered. While VW has admitted cheating in the United States and is making good-will payments to customers, it has claimed that the same behavior was not illegal under European rules. So VW is not paying European customers, even though it is recalling its cars in both markets.

Many Europeans are not pleased. “You’ve treated European customers with disdain,” one member of the British Parliament complained to VW’s top executive in Britain at a hearing last month.

In an interview, Mr. Bode offered a more contrite message. “There’s no doubt that we built up things within the cars which were completely wrong and which worked against the laws,” he said, when asked about VW’s posture in Europe.

While there have been many past automotive crises, this one is fundamentally different. Consumers are used to automotive safety recalls big and small. There was General Motors’ crisis involving defective ignition switches and Toyota’s scandal related to sudden vehicle acceleration. Honda was recently fined $70 million for not reporting safety problems.

But Volkswagen is seen as particularly brazen. The public tends to show “a little more tolerance” for recalls and labor issues, said Wendy Salomon, a vice president at Nielsen, which conducted the recent Harris Poll. But the polling, she said, showed respondents were “least tolerant” of “lying and misrepresentation and intentional wrongdoing.”

While it is not the first time American regulators have caught an automaker using a so-called defeat device — a mechanism or software used to thwart emissions tests — the Volkswagen deception takes place on a global scale, from a company that marketed itself as environmentally sensitive, and at a time when emissions regulation is being taken increasingly seriously.

Some missteps have been clear. Promotion of insiders, including Mr. Müller, a trusted longtime lieutenant of Mr. Winterkorn, is not a hallmark of a fresh start. Treating customers differently in Europe and the United States is asking for trouble.

Volkswagen has been scrambling to enlist help. The company has brought in three public relations firms based in three different countries — Kekst in the United States, Finsbury in Britain and Hering Schuppener in Germany — to join Edelman, an American firm already on retainer. VW has been paying Richard Gaul, the former communications chief of BMW, 20,000 euros a month, about $22,000, to work as a part-time, 60-hour-a-month consultant, according to a contract reviewed by The New York Times. Mr. Bode, however, said Mr. Gaul had been advising the company on other matters.

VW also hired Jones Day, a law firm, to conduct an internal investigation, though the firm’s own website said it helps clients determine “whether and how to voluntarily disclose criminal conduct to the government,” suggesting disclosing criminal conduct is not a foregone conclusion. The top executive at VW’s Porsche division has already said he is hoping to reinstate Wolfgang Hatz, the suspended engineering chief who is seen as a central figure in the scandal.

Mr. Bode himself was part of a broad reshuffle of management from within the company’s ranks. He said VW had revived a “newsroom” for rapid response to inquiries on the scandal from the news media and others, made up of 15 to 20 employees from the communications and sales teams and people with technical expertise. VW had such a newsroom during a prostitution scandal in 2007 and 2008 involving the company and its trade unions.

Mr. Bode accompanied Mr. Müller on his trip to the United States where he made the controversial statement. “It was my failure,” Mr. Bode said. He said the questioning, around the Detroit auto show, was too chaotic, with many reporters asking questions. He said he should have organized more individual interviews to forestall confusion.

“If you have situations like this where the C.E.O. is doing his first step into this market where you have the biggest problem, and there are millions of questions in the air, then you have to say, ‘Let’s do it in a more organized way,’ ” he said.

The company is also overhauling its advertising message. “Das Auto,” the chest-thumping old slogan, is out. The simpler tagline “Volkswagen” is in. Since apologizing in newspapers after the scandal broke, the company has been keeping a relatively low profile.

Mr. Bode said Volkswagen was awaiting a resolution to its continuing talks with American regulators before settling on a new marketing strategy in the United States. Discussions have been contentious. The Environmental Protection Agency and regulators in California and Canada have accused the company of installing defeat device software in a set of larger vehicles that were not among those included in Volkswagen’s admissions.

“We have to start with this campaign when we have agreed to a solution with the authorities.” Mr. Bode said. “Then we have to see the overall picture.”

Irving Schenkler, a professor and crisis management expert at New York University, said there have been few parallels in history. “It’s unprecedented in terms of the cross-national scope of it, the degree of the problems,” he said. “There are so many different fronts.”

Even in Germany, the news media has hardly given the company a free pass. “VW is overwhelmed,” said Kayhan Özgenc, a reporter at Bild am Sonntag, a newspaper that has been particularly aggressive, adding, “It was a change from paradise directly into hell, from the most profitable carmaker to an emergency situation.”

Mr. Bode, for his part, has been critical. “What the German press did was call everything wrong which is and was done by the company,” he said.

Managing the crisis, he added, has been “a step-by-step thing, learning by doing.” Someday, he said, he could become a university professor and give speeches on how to manage a crisis. “Hundreds of speeches,” he said. “That’s a joke. We are far away from joking about this. It’s a deep, deep thing for the company.”

A version of this article appears in print on

of the New York edition